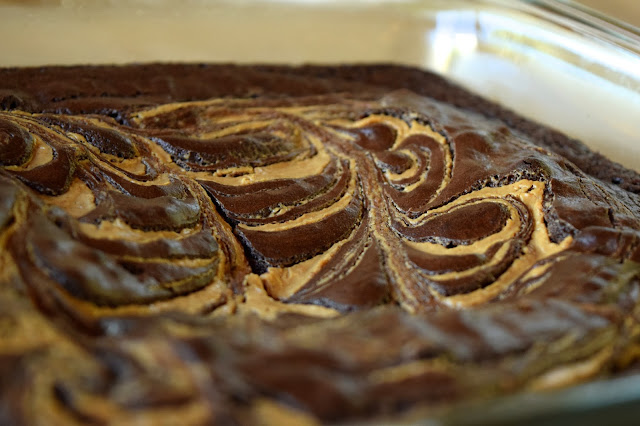 It is a well known fact in my family that any dessert that contains the ridiculously delicious combination of chocolate and peanut butter is welcomed anytime, anywhere. In fact, showing up with a dessert of this magnitude will often times result in a big round of applause complete with a few hoots and hollers. It's a hero's welcome as soon as you walk in the door. Who wouldn't want that? 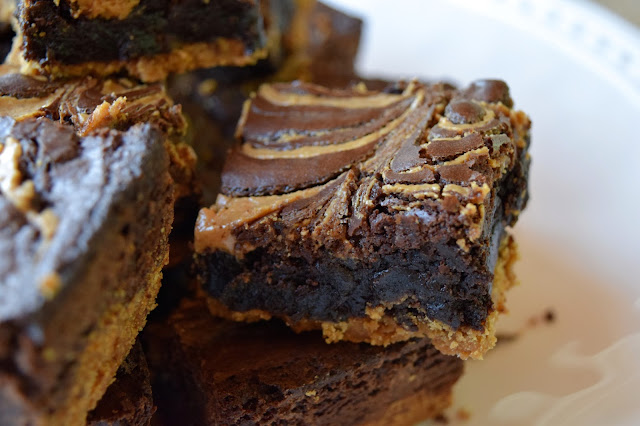 So when I was brainstorming on quick and easy dessert recipes, peanut butter swirl brownies came to mind. Geez, even the name sounds delicious. Peanut Butter SWIRL, mmmmmm... The brilliant thought came to mind as I was in the car with Patrick the other day. We were sitting there in a brief silence when all of a sudden I turned to him from the passenger seat and blurted out,"Why couldn't I make a graham cracker crust and pour brownie batter on top of it and then swirl peanut butter through it!?"

I think my voice got louder as I said the phrase "peanut butter swirl" and there may have been some flaring arm movements made. "Why couldn't I?!" I kept saying. Patrick just looked at me with a patient smirk and said, "Why couldn't you?" 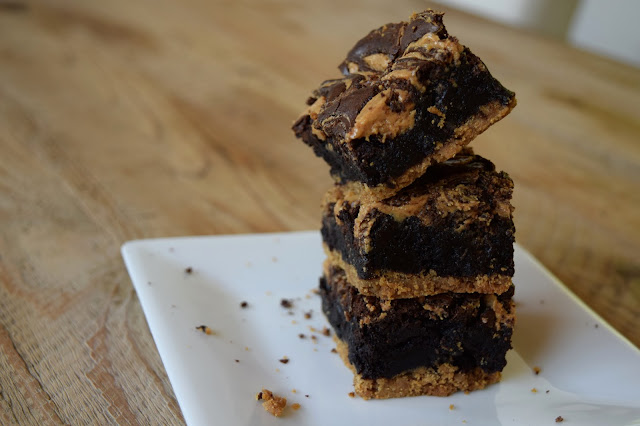 I felt like I was really on to something. Chocolate. Peanut Butter. Graham Crackers. It's like the three amigos but without the mariachi costumes. I kept the recipe simple on purpose because sometimes you just want to be able to go into your pantry, grab a few things, and whip something up. I brought these to my family last week while they were renting a beach condo for their 4th of July vacation.

(Yes, you heard me right, beach condo. As in singular. Crazy Cubans.)

My cousin Katie freaked out.
My uncle Ross let out his famous whistle.
My mom couldn't believe how easy the recipe was.
My aunt let out a "Lauurrennn" and clapped when she saw them.
And my dad claimed they were the "best brownies he's ever had."

Not bad, I'd say. Oh, and the brownies were all gone before sunset.
Moral of the story: Make these and feel like a hero. Victory has never tasted so sweet.

This dessert is ridiculous. It’s so delicious and so simple. You may want to brace yourself for a standing ovation when you bring these to a party. Don’t say I didn’t warn you.

Preheat the oven to 350 degrees.

Put the butter in a 8-by-8 inch glass baking pan and place in the oven until it is melted, about 10 minutes. Remove from the oven and pour the graham cracker crumbs into the melted butter. Use a wooden spoon to mix well (remember, the pan is hot!). Use the back of the spoon to press down and form an even crust on the bottom of the pan. Let the pan cool slightly. Then carefully grease the sides of the pan above the crust.

Bake for 45-50 minutes, or until the edges are cooked but is still slightly undercooked in the middle (this will make for fudgy brownies). Careful not to overbake! Let it cool completely before cutting into squares.