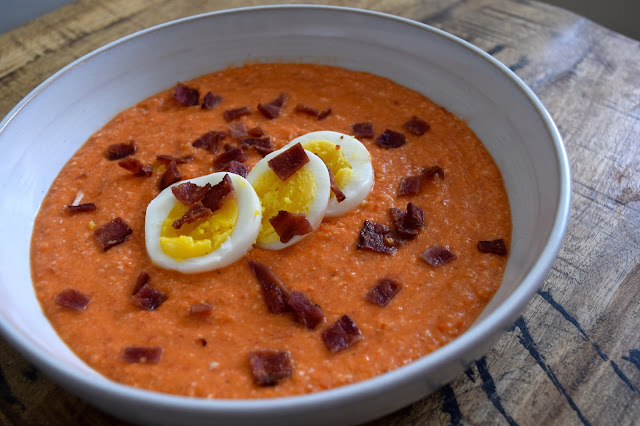 So... I don't have A/C in my truck right now. To the normal person, that may not sound like a state of emergency, but I live in Florida. And here when the dog days of summer come around, it's so hot you literally start sweating just walking out to the car in the morning! Forget your makeup. It starts melting off your face the minute you get outside. And if you don't have A/C in your car, it's like driving a portable sauna around town. Great. Well, I know what's moving to the top of my "to-do" list this week. Geez Louise.

And since I've been driving around in portable sauna recently, the last thing I want to eat is something hot. Which coincidentally made me reminisce about the summer in college I studied in Sevilla. It was one of the most amazing experiences of my life. It was also one of the hottest. Oh stop, I'm not talking about the Spanish men, I'm talking about the weather. Holy cow, it gets hot there. I guess it didn't help that I was walking three miles to and from school everyday. It wasn't until I came back to the United States when I discovered that the daily forecast of 40 degrees Celsius was 104 degrees Fahrenheit. 104 degrees!? Oh and we didn't have A/C! 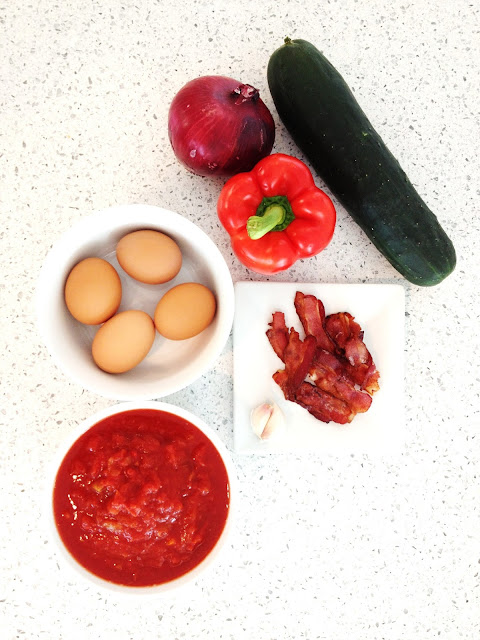 Luckily, my house mom Aurora was a master making Salmorejo - a delicious and hearty Spanish soup that is served perfectly chilled. I would devour it. It was exactly what I needed after a long hot, A/C-less afternoon. I fell so in love with Aurora's soup that I just had to ask her for the recipe. She looked at me like I was crazy to think that she had the recipe written down! Instead, she let me watch her make it. So there I was with a notebook and pen in hand just trying to keep up. She did everything so fast and of course, no measurements.

When I decided to try the "recipe," I made a few changes to make it more of my own. More cucumber. More garlic. A little pinch of salt. It was the stuff of dreams. Delicious. But do you know what? Patrick never wanted it. "I don't like cold soup," he would say. I agree it's a little bit different than the norm but I thought it was fabulous. What could I do to make it more tasty? Hmmm... I could take him for a spin in the portable sauna. Too harsh? 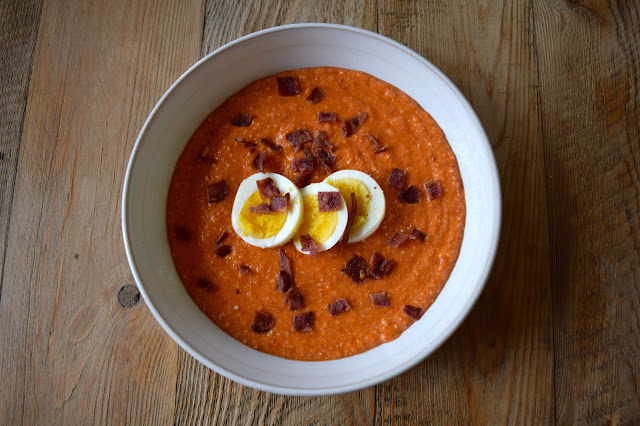 So, I topped my chilled soup with perfectly crisp pieces of salty bacon and held my breathe. Patrick absolutely loved it! In fact, the other night, he walked into the kitchen while I was taking these pictures. I told him I would be done in a few minutes and then I would get started on dinner. He looked at me so disappointed and said, "Oh, we're not eating Salmorejo? I love that stuff."

My heart melted and then I thought, thank God for bacon.

Now, if I could just get the A/C fixed before everything else melts...

When summer rolls around, I start craving lighter meals. This is one of my go-to summer lunches. The addition of bread creates a great texture and the hard boiled eggs make it hearty. Serve this to me after a long, hot afternoon on the beach and I am in heaven.

Place eggs in a medium saucepan and fill with cold water until the eggs are completely submerged. Bring to a boil over medium-high heat. Once the water is boiling, turn off the heat. Let the eggs sit in the hot water, uncovered, for 15 minutes. Then, remove the eggs from the water. Let the eggs sit for about 2 minutes. Once they are cool enough to handle, roll each egg on the counter to crack the shell. Then carefully remove the shell of each hard-boiled egg.* Discard shells. Set the eggs aside.

In a blender or food processor, place the tomatoes, red pepper, cucumber, red onion, garlic, cubed bread, salt, and 2 hard-boiled eggs. Blend until smooth. Then with the blender running, slowly pour in the extra-virgin olive oil. Blend until completely combined. Transfer soup to an airtight container and place in the fridge for 1-2 hours, or until cold.

Right before serving, cook your choice of bacon in a large sauté pan over medium to medium-high heat (if you are using turkey bacon, you might want to add 2 tablespoon extra-virgin olive oil to the pan). Cook until crisp on both sides, turning them to brown evenly. Chop bacon and set aside.

When ready to serve, slice or crumble the remaining 2 hard-boiled eggs and place on top of the chilled soup. Then top each bowl with the chopped bacon and a drizzle of olive oil. Enjoy!
*Save the garbage disposal! Did you know egg shells and shrimp shells are two of the worst things to put in your garbage disposal? Instead, just toss egg shells into the trash.

Posted by Lauren Marie at 9:38 AM
Email ThisBlogThis!Share to TwitterShare to FacebookShare to Pinterest
Labels: soup